School of Anthropology and Museum Ethnography

School of Anthropology and Museum Ethnography

Anthropology had an intimate relationship with colonialism from its nineteenth-century beginnings as a discipline. Although anthropology, as the study of humanity, could be thought to have a very general scope, in practice it was seen as the study of ‘primitive’ peoples. It was colonial domination that provided anthropologists with access to those communities, whether in the Americas, Africa, South and South-East Asia, or Australia and the Pacific. It was the sense of dramatic difference between these peoples and their supposedly ‘civilized’ colonizers, and the evolutionist assumption that ‘their’ present represented ‘our’ past, that provided the intellectual impetus for the discipline in this formative period.

There has been much debate about the extent of the discipline’s complicity with the colonial project itself. Some anthropologists felt honour bound to support the peoples they studied. Others, shamefully, worked for their further domination. Many did both, depending on timing and context. In the context of British colonialism at least, it seems that colonial administrators were frequently unimpressed by the practical relevance of anthropological expertise, although, especially from the 1930s onwards, they did facilitate and fund anthropological research and training in the hope that it would help them to govern more effectively. However critical some individual anthropologists might have been of the colonial encounter, anthropology did not trouble the colonial enterprise either – and it certainly profited from it.

As one of the oldest anthropology departments in the country and indeed the world, dating from the early 1900s, Oxford anthropology has its own close relationship with this history. It gained prestige and funding from its role in helping to train colonial officers and administrators, owing to the notion that anthropology could offer special insights into the ‘tribal’ people of the colonies. This would continue up until the end of empire in the 1960s, and Oxford anthropology flourished especially in the post-war years. Here it drew on an almost unrivalled intellectual reputation, owed especially to studies that had been carried out in Africa, at the height of British colonial involvement. The research of many well-known Oxford anthropologists, including the most famous of all, Sir Edward Evans-Pritchard (d. 1973), was funded and even instructed by colonial administrations. Evans-Pritchard’s work had a very wide influence within and beyond anthropology. He argued for the serious appreciation of other ways of life and demonstrated, with consummate linguistic and ethnographic skill, how it could be done. But his work would not have been possible if he had not been working in the colonial context. Some have suggested that his writing, particularly The Nuer (1940), deliberately downplayed not just the violence of the imposition of colonial rule in southern Sudan but also the fact he was only able to undertake the research through the authorization of the colonial government, which was having trouble ‘pacifying’ the Nuer at the time. 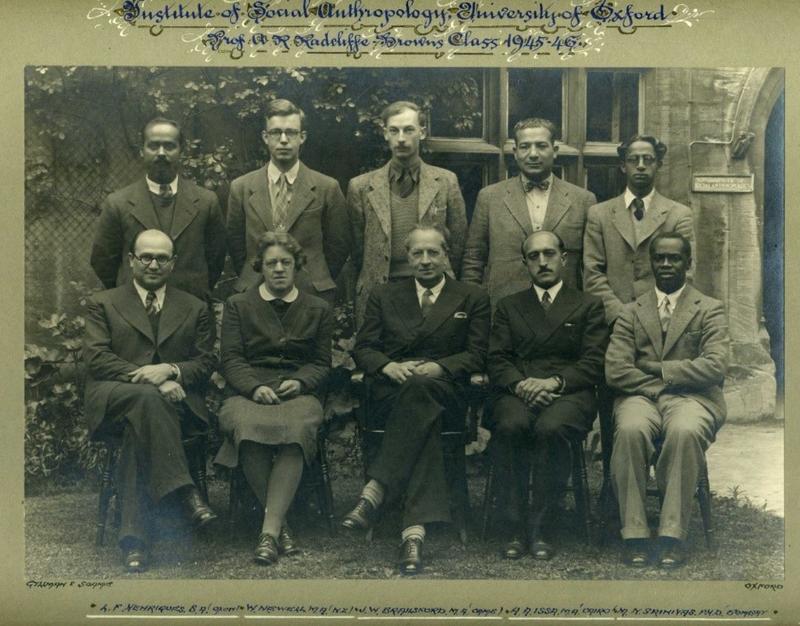 The anthropology department at Oxford was not engaged only in the support of British, or white European and North American, students and scholars. M.N. Srinivas (d. 1999) studied with Evans-Pritchard and went on to become the preeminent sociologist of India, a giant of the field, after a period teaching at Oxford as University Lecturer in the Social Anthropology of South Asia. He would later be succeeded in that post by Ravindra Jain, who then went to a Professorship in Anthropology at Jawaharlal Nehru University, New Delhi. Kofia Abrefa Busia (d. 1978) won his doctorate from the department and then became the first black African University Professor of Anthropology, and then the Prime Minister of Ghana. Another graduate, Professor George Hagan, became Director of the Institute of African Studies at the University of Ghana, Minister of Culture and a presidential candidate. The celebrated Ugandan poet Okot p’Bitek (d. 1982) studied for a doctorate, but was scathing of the way the subject was taught and thought it an instrument of colonial exploitation; his thesis was failed. It is clear from other anecdotal reports and reminiscences that there were many more students from the global South who found their experience of the department patronising – sometimes worse. Racist and imperial attitudes had an enduring life here, as they did elsewhere in the university.

These figures, among many others, are a distinguished part of the department’s history. Their individual legacies are no doubt debated; but, for the most part, their contributions to anthropology at Oxford have not been as celebrated as their white counterparts. That recognition should be extended to all the other students and researchers from across the world who have immeasurably enriched the life of the department from its very beginnings.

In the 1970s, a re-evaluation and critique of anthropology’s relationship with colonialism began within the discipline. A landmark book on this topic, Anthropology and the colonial encounter, published in 1973, was edited by Talal Asad, a now highly distinguished British anthropologist based in the United States, who had been a student of Evans-Pritchard at Oxford and done his doctoral research in Sudan. Asad’s critical work was joined by that of many others, and anthropology has since struggled to rethink its intellectual and methodological commitments in ways that might overcome the power imbalance in the study by scholars from metropolitan academic centres of less privileged people elsewhere. Various means to give greater voice to those studied have been attempted, including more genuinely collaborative approaches to research and publication. ‘Anthropology at home’ has become more common, as has ‘studying up’ – the anthropology of elites.

Research in the department today strives to live up to those new standards and ideals, through collaborative research that very often focuses on issues of inequality and structural exclusion – whether that be collaborations with Dalit scholars in Nepal and Nepali migrants in the UK, co-authoring publications with Angolan scholars based on collaborations with new religious movements in Central and West Africa and helping to re-establish the National Ethnographic Museum of Guinea-Bissau, working with Gamo elders on farming and foodways in rural Ethiopia, co-curating exhibitions with young Tibetan artists and curators, or helping to ‘decolonise’ some of the University of Oxford’s museums and collections, most notably those of the Pitt Rivers Museum, as well as the Botanical Garden’s.

Academic decolonization and the struggle against racism are an intrinsic part of contemporary anthropology’s mission. But the killing of George Floyd, and the Black Lives Matter and Rhodes Must Fall movements have made us all question whether enough is actually being done – especially our students, who feel that we can and must do more. We have convened an anti-racism, equality, and diversity group, driven by student concerns but with senior staff commitment to take greater action to decolonize the curriculum, engage with the department’s colonial past, and celebrate the achievements of the whole range of its past and present students and scholars. There is a long way to go, but small steps on this journey are being taken, for example in the exhibition ‘Diversifying Portraiture in Anthropology’ curated by Helen Worrell as part of the ASA2018 conference in Oxford. As part of that initiative, staff and students were invited to nominate an anthropologist who has inspired them from communities currently under-represented, for example people of colour, women, LGBTIQ+, and disabled anthropologists. The posters arising from the exhibition are now on permanent display within the School, an inspiration to us all to keep re-examining our past and working towards a more incl