Professional Oxford-based photographer, Rory Carnegie, photographed former Wadham student and noted novelist, Diran Adebayo, for a portrait in the Diversifying Portraiture series. They both comment on this experience from a personal perspective. 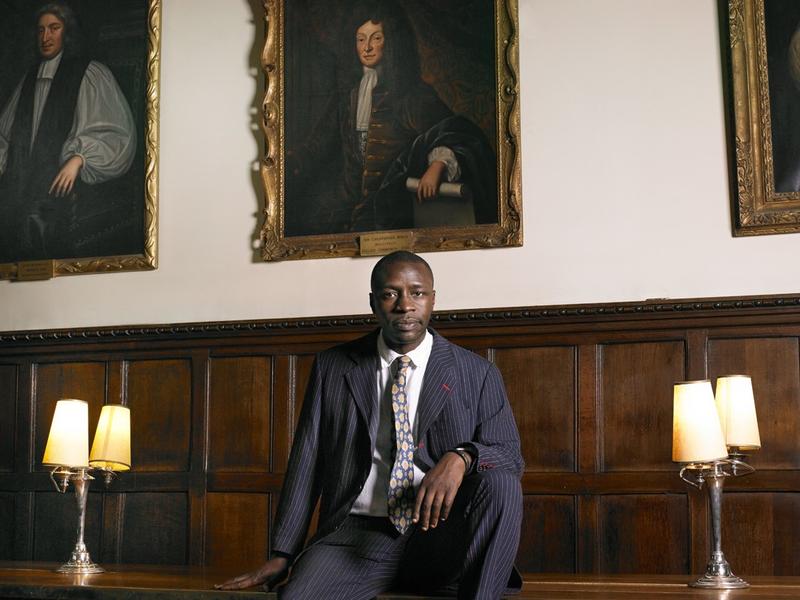 Whenever I make a photographic portrait, I see it as a collaboration. Sometimes the balance is heavier on one side, but with Diran I think that from the outset we were in total accord. After making initial contact with him I contacted Wadham, who were very helpful and generous and said that I could use any of their facilities. After a recce, it seemed that the Dining Hall was to be the location. I had eaten in various College dining halls and knew that for many, they were the architectural hub of a particular tradition…the paneling and the large paintings. The Wadham Hall has a portrait of Sir Christopher Wren, under which is a placard with the words, ‘Christopher Wren “An Ordinary Man”’, which was so off the mark, that it was funny.

When it came to the day of the actual shoot, we tried out the various outfits/clothes that Diran had brought, and he decided on a suit, which was perfect. As a sitter, he was enthusiastic and suggested different poses and expressions. All in all, it went very smoothly, and it was lovely to be featured on the BBC website amongst other outlets. I think a good image can tell a simple story, and this does that.

I rarely used to go to ‘Hall’ – the large, august wood-paneled dining-hall that was used for supper and where we shot the photos - when I was at Wadham. (In fact, at this distance, I’m having a little hesitation over whether that was its official name.) My college circle, who were more at the bohemian, unfussy end of things, would usually eat our dinner in the College’s Refectory - which was a smaller, low-key, modern space, below the JCR and next to the bar, intended to take any overspill from Hall. There you could just grab a tray, join a queue and have all your courses served at once. In Hall you’d have to wait for each course to be brought and taken away by hired help, might find yourself sat next to some Fellow you didn’t know chugging on his free wine, and feel a level of constraint. In fact, in most Oxford Colleges then, you’d have to slip on the formal, black half-length gown you’d used at the Matriculation ceremony to go to dinner in Hall. Not at Wadham, in my recollection – too progressive for that. (‘The People’s Republic of Wadham’, as it was known, although I think I may have preferred it in earlier, less righteous, more decadent era – the days of ‘Wadham and Gomorrah’ under the wardenship of classicist Maurice Bowra).

But I was in Hall, of course, sometimes, and was struck, as any visitor would be, by the large bewigged paintings of sundry 17thand 18th century notables that adorned the walls. The one I used to linger on, the one I knew most about, was Christopher Wren’s, the architect of Saint Paul’s. The notion of sitting in front of him, in a twenty-first century version of bewiggedom occurred to me as soon as Rory told me he’d wangled permission to shoot at Wadham. I imagined a playful juxtaposition, fun with a little meaning: a vaguely post-colonial statement about progression. Rory, too, seemed to agree that Wren was the winner. A great, simple, solution to smartness, in the choice of the suit – here, at least, we’ve moved on from days of yore.

Back to University Projects