We dare to imagine our educational institution banking on a livable planet and a just, decolonised world. But there is new evidence of the opposite: the Cherwell's recent investigation revealed £150 million invested by Oxford's colleges in offshore tax havens (that in turn invest in funds heavily exposed to fossil fuels), plus direct investments by New and Hertford in fossil fuels and arms corporations. We already knew that the central University declined in 2015 to fully divest from fossil fuels and arms, choosing a watered-down resolution that moved £0.

OUR AIMS: In the violent and unjust race for the planet’s fast-diminishing natural resources, fossil fuel and arms corporations have played prominent and intertwined roles. Climate change -- and the forced migration, natural disasters, and critical impoverishment it has caused -- has created a wealth of business opportunities for security, surveillance, and arms industries. Those linked phenomena disproportionately impact the formerly colonised, the global working class, and communities of colour: the very populations considered sacrificeable for profit.

We demand full divestment, over a period of two years, from direct and indirect holdings in the top 200 fossil fuel companies as listed on Carbon Underground in the University's endowment fund and in the funds of its colleges. We demand an end to research partnerships with fossil fuel companies that have no plan to comply with the Paris Agreement and cease their powerful fueling of climate breakdown.

We demand that the University honour its ethical responsibilities by immediately terminating its investments in, and all institutional links with, companies and institutions - including Mitsubishi Electric and Rolls Royce - which produce arms and thus profit from exploitation, illegal wars and ongoing settler-colonisation abroad, until they end their role in such unforgivable violations of international law. We demand an end to arms companies recruitment drives at Oxford and transparency about partnerships with and relationships to arms companies. 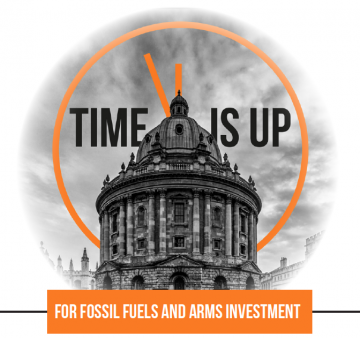