Last year, groups of Oxford secondary school students were invited to produce research posters for an academic conference, ‘Conflict and Identity: confronting the past through education’, organised by the Department of Education. In response to the question, ‘Where do you see conflict and how can the curriculum address it?, many students identified topics embedded in legacies of colonialism. As an example, when asked why he had chosen the issue of British race relations, one white Irish student, a sixth-former at a predominately white local state school, explained:

When I moved to England over eight years ago, I moved to London and shortly after saw the outburst of what became known as the ‘London Riots’. Coming from a country that was 99% white, I was shocked and confused at the hate and conflict between the two ethnic groups at the time. As I got older, I became shocked about the limited coverage of such an event. 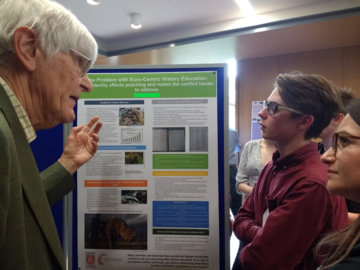 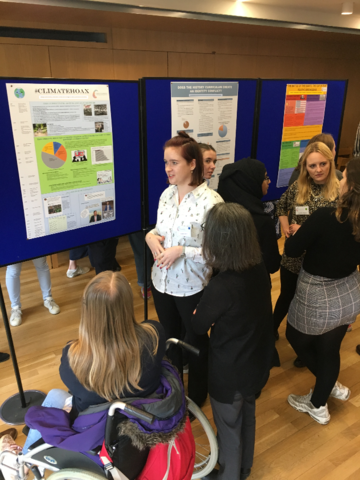 This year has seen young people across the country demand more from their education – from a better account of Britain’s colonial past1 to the lack of black British history2 in the UK curriculum. These calls are not new. Next year will witness the 50th anniversary of Bernard Coard’s ground-breaking pamphlet, ‘How the West Indian Child is Made Educationally Sub-normal in the British School System’. Coard called for, amongst other things, the teaching of Black Studies in all schools. Similar calls have been echoed in a number of government reports from Bullock in 1975, Rampton in 1981, to the Swann Report in 1985. The longevity of these calls talks to the persistence of elisions in the legacies of colonialism – a persistent amnesia. Although, as Andrew Mycock (Carretero, Berger & Grever, 2017) argues, drawing on analysis of the presence of empire in schools, what is at work can also be described as a form of ‘selective myopia’ where memory of empire is present but selective. Another take is from Paul Gilroy (Gilroy, 2004, 2005) who, drawing on Freud, talks about the way the memory of empire haunts the present, especially in a morbid obsession with its loss. Gilroy’s broader concern is that this moment of melancholia has obstructed the process of working through the legacy of colonialism that Gilroy argues is implicated not only in hostility and violence directed at blacks, immigrants and aliens, but also in an inability to value the ordinary, unruly multiculturalism that has evolved organically and unnoticed in urban centres.

Thus, a key imperative of decolonial movements is to address the history of an institution’s past, tracing the legacies of colonialism and interrogating the disciplinary framing of the subject, the basis of its knowledge. In Toni Morrison’s book ‘Beloved’ (Morrison, 1987) the character Sethe ‘… remember[s] things she had forgotten she knew’. Historian Catherine Hall suggests that unless the legacy of the British empire is re-remembered it will continue to haunt the present.

The Department of Education’s history is a relatively new one compared to others across the collegiate university and work remains to be done in exploring these legacies. However, a quick look at the register of diplomas going back to 1898 quickly reveals the colonial links. William Penney, gained an Education Masters distinction in 1901, was born in India in 1862. Giles Ireton Eliot, who matriculated in 1901, was born in South Australia and was a teacher at Melbourne Grammar. His grandfather, William Giles, was the third colonial manager of the South Australian company set up in 1835 to facilitate the purchase of land.  Many of these original purchases were enabled by the British Government’s decision to compensate former slaveholders in the Caribbean (Coventry, 2019). Florence Mahoney, born in the Gambia, obtained a postgraduate degree in Education in 1952. She goes on to establish, with others, the national museum in Banjul in 1973, as well as writing a number of books about Gambian history and giving lie to the controversial ideas of Oxford’s Regus History professor, Hugh Trevor-Roper (Roberts, 2013, p62). What these stories show is the complicated networks and relationships that are the legacies of Empire, playing out in multiple ways.

The task of exploring the imperial legacies of Education as a discipline is, however, more complicated. Interestingly, the first government grants towards mass education in England and Wales were in 1833 – the same year as the Slavery Abolition Act. The Elementary Education Act of 1870 accelerated the move to mass education, and reviews of school textbooks and handbooks reveal the promotion of imperial patriotism. Yet, as Peter Yeandle (2015) has shown, this surface reading can be misleading. Although the intent was clearly there to ‘inculcate imperial values’, when one probes into the broader pedagogical culture a more complicated picture of ‘enlightened patriotism’ is revealed.

Yeandle’s research shows that a little recognised group of educationalists, known as the ‘Herbartians’, were hugely influential in producing pedagogic texts for the teaching of history, which were adopted in schools across the country in the 1800s. Their insistence on teaching to the emotions, teaching moral biography, teaching age-appropriate content and ensuring all learning was geared towards the wider civic good gained considerable traction – and was at odds with the ideas of an imperial education. This mediating influence signals the place of educational theories in supporting pedagogy in schools and illustrates that attention needs to be paid not just to curriculum and resources but to pedagogy and learners.

Furthermore, John Furlong (2013) charts the inherent complexity of a discipline founded on four others: Philosophy, History, Sociology and Psychology. Unravelling this Gordian knot is further complicated by the different origins and locations of the education discipline, whether in universities or day training institutions, each of which being subject to different values and sources of control. Furlong argues that Education’s presence as a discipline (but also, possibly, as a departmental institution) in the university is an ambivalent one, forced to reconcile key tensions: between theory and practice, and between a global outlook and one that considers its local context. These tensions are familiar in discourses around decolonisation, in which accusations might be made about the avoidance of the material legacies of colonialism that are evident in relation to student admissions or staffing, even while engaging with theory related to the field. But also where a global outlook can serve to hide how race, class and locality can intersect and serve to exclude local British black students from access and participation. Sarah Stockwell (2018) shows how the universities of Oxford and Cambridge had an imperial role in training colonial administrators, which shifted to one of training ‘locals’, both before and after independence. Although it is ‘perhaps surprising’ (p137) that Oxbridge was able to continue in this role for so long, Stockwell highlights the ability of institutions, and individuals within institutions, to be entrepreneurial and use the opportunities offered by decolonisation. She also points out that influence was not unidirectional, and that the universities’ syllabi, particularly Development Studies, were influenced in turn by African decolonisation.

The Department today engages in a range of work that looks to address some of the issues raised by the legacies of colonialism. In research activity, colleagues are engaged in work looking at the development of the Oxford DPhil and tracing the political pathways and differing educational policy trajectories of former British and French colonies. Colleagues in Applied Linguistics have an active cohort of research surrounding the notion of ‘global Englishes’, which includes elements of decolonising English as a global language with global ownership, as well as a strong research focus on children with English as an Additional Language (EAL) who tend to come from ethnic minority groups. This work aims to understand and support the multilingual and multicultural realities within English schools and society. The Philosophy, Religion and Education Research Group has a current seminar series drawing on research related to decolonising the RE curriculum. The work of the Centre for Comparative and International Education includes an examination of colonialism in the former Soviet countries. Some of our work (e.g., Strand’s analysis of ethnic, social class and gender gaps in a wide range of educational outcomes) has contributed to discussions within Government departments, local authorities and schools. Strand’s ESRC report (2018), Ethnic disproportionality in the identification of Special Educational Needs (SEN) in England: Extent, causes and consequences echoes the issues raised by Coard in 1971. Sally Tomlinson and Danny Dorling’s (2019) work charts the playing out of an older imperial school curriculum in Brexit debates, a theme Tomlinson pursues in her solo work (2019), ‘Education and Race from Empire to Brexit’. These are just a few examples of how research ongoing in the department is directly applicable to issues concerning colonial biases inherent within educational systems.

In teaching programmes, colleagues working on the Science PGCE address issues of representation and work with the Reading International Solidarity Centre which looks at issues of global citizenship. English tutors have sessions on intercultural pedagogy and racial literacy as well as a collaborative session with History colleagues looking at reconfiguring the poetry of the First World War to tell a global story. Students on MSc programmes (in Education and Applied Linguistics) are also introduced to ways in which some policies concerning language in Education can serve to both promote and inhibit different students depending on their linguistic and ethnic backgrounds, both locally and in regions around the world.

The above represents a snapshot. It should not be interpreted as self-congratulatory; work remains to be done. But a critical feature of much of the work is collaboration. A good example is the TDEP-funded project (July 2020-June 2021) ‘Decolonising Research Methods’. This involves a collaboration between Education and Geography with a link to colleagues in South Africa. It is both local and global, and seeks to integrate theory and practice.

Decolonial scholarship recommends ‘border thinking’ (Mignolo, 2000) ‘coalitional starting points’ (Lugones, 2010) and a ‘connected’ (Bhambra, 2014) approach, so we should seek to enable interdisciplinary conversations. The multiple antecedents of Education as a discipline suggest it is well placed to undertake this work. And that it must since education is key to addressing these colonial legacies. In addition, the Department of Education’s unique partnership with local state schools, including the Oxford Education Deanery, offers a dynamic context for praxis. Although care must be taken to avoid the dangers of paternalism (King and Rivett, 2015) that can characterise some approaches to impact agenda and knowledge exchange projects. Direct work with teachers and young people provides an opportunity for colleagues across the University to consider how they might make their impact agendas more dynamic, generating research questions and involving partners and stakeholders at the start of the research process rather than at the end.

One of the speakers at the ‘Conflict and Identity’ conference, Sam Rushworth (Special Advisor to Head of Strategy, Aegis Trust, Rwanda/UK) commented in his feedback: “I particularly appreciated the opportunity to learn from high-school/sixth-form students.” The Department of Education still has much to learn, but is also well positioned to enable continuing and urgent conversations about how Oxford explores and addresses its colonial legacies.  The Tide-Runnymede report (2019) called for research to evaluate students’ knowledge of migration, belonging, and empire, as well as teachers’ interest in and concerns and ambivalences about these topics. This research will enable the development of a professional development programme supporting teachers with their teaching of migration , belonging and empire.  This will also need to be informed by academic scholarship across disciplines and we look forward to fruitful collaborations with the wider collegiate university in this regard.