St Anne’s was inaugurated as a full College of the University of Oxford in 1952, but it has its roots in the Association for the Education of Women and, later, the Society of Oxford Home Students, as it became in 1879. With Founding Fellows such as Annie Rogers at the forefront of the drive towards women’s degrees, St Anne’s has always been a forward-looking, outward-facing College, geared towards widening access and providing opportunities to the brightest and most ambitious students, including those from underrepresented groups. We are proud of this ethos to this day, but especially pleased to be able to trace it in evidence in our archives; in the 1930s, the first African American woman to be a member of the University, Dr Merze Tate, was a member of St Anne’s. Merze Tate’s legacy is commemorated today in the New Library, where the Merze Tate Room bears her name. The Society of Oxford Home Students had a diverse and international profile, and students continued to come to St Anne’s in the 1950s and 1960s from all over the globe. One of the most prominent of our international alumnae from the early decades of full College status was the Indian economist, Devaki Jain, whose eponymous lecture series we have been delighted to host for several years. 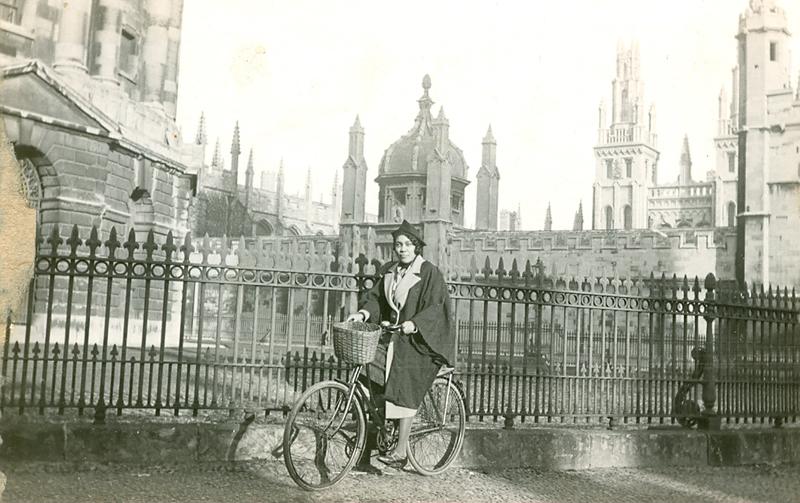 Unfortunately, however, Merze Tate’s experience in Oxford – she commented that the other girls seemed to view her as a “spectacle” – was not wholly a positive one, and we are keenly aware of the continued need to strive towards widening access for our BAME students and ensuring that St Anne’s is a place in which they feel welcome. Towards this end, we have recently partnered with COSARAF to offer the Sheikh Family Scholarship for Muslim students from underprivileged backgrounds who are in need of financial support. We are also proud of the outreach work we have undertaken with groups such as the Caribbean STEM Coaching Club, whose goal is to encourage Black students to aim for Oxford. Through our Advisory Fellow, Tom Ilube, we are also pleased to be forging stronger links with the Black entrepreneurial community in the UK.

It has been rightly argued for many years that the curriculum at Oxford is overly white and overly male in its orientation. For this reason, the English faculty at St Anne’s have been working tirelessly to decolonialise our curriculum and ensure that teaching is not only not racist, but actively anti-racist.  For example, for Prelims paper 1, students will read chapters from Henry Louis Gates Jr.'s Loose Canons: Notes on the Culture Wars (with recommended extra reading by Lee Morrissey and Jane Thompkins) which interrogate claims of objective or 'colour-blind' value judgement from previous scholars like Harold Bloom. Other writers featured include Audre Lorde and Edward alongside Judith Butler, Adrienne Rich and a return to Gates Jr/, with extra recommended reading by Chinua Achebe, Gayatri Spivak, Homi K. Bhabha, Frantz Fanon, and Tressie McMillan Cottom for those who are interested in delving further.

In Prelims Papers 3 and 4, students will read work from the abolitionist poet, Frances Watkins Harper, who wrote on the specific experiences faced by African-American women in the nineteenth century. Discussion and analysis of her writing, and comparison with the more ‘canonical’ views of Tennyson and Robert Browning, allow important questions on enslavement, colonialism, and gender inequity to emerge. Another seminar addresses the abolitionist life-writer Mary Prince, a formerly enslaved woman born in Bermuda. This continues the conversation on themes related to Harper’s poetry, including the need to consider the intersectional experiences of race, gender, and motherhood – and extends this to ask broader material questions on composition (especially on how Prince’s life-writing was edited and co-opted by the British activist, Thomas Pringle) and on genre (through comparison with Jane Eyre, a first-person novel partially marketed as autobiography). For their tutorial essays, students are encouraged to write on these authors, or to analyse other depictions of imperialism from this period (from the colonialist novella, Heart of Darkness, to the vital anti-racism essays of W.E.B. Du Bois).

In the wake of the Black Lives Matter movement, the importance of anti-racist teaching and practices is more pressing than ever, and we are actively considering, in tandem with Tom Ilube, how we can develop this further at St Anne’s.