A History of Rhodes Must Fall at Oxford

On 19 March 2015, a handful of students arranged a protest outside Oriel College, home of a statue of Cecil Rhodes overlooking the High Street. Behind a large painted banner, their fists raised, the protestors expressed solidarity with the #RhodesMustFall movement at the University of Cape Town (UCT). Although the image spread across social media, no formal movement had actually yet begun in Oxford.

A few weeks later, at a lunch which convened various Oxford-based anti-racism activists, the question of Oxford's Rhodes statue emerged prominently. As the discussion unfolded, a new movement was proposed to confront racism and colonial apologism at Oxford.

In 2015, the University accepted just 24 black British undergraduates into the undergraduate system. A 2013 access to information request revealed that 21 of Oxford’s Colleges did not accept a single black student in 2012. All this is apart from the extreme idolisation of colonial symbols throughout the University, and the deeply Eurocentric curriculum. Thus, when the Rhodes statue eventually fell at UCT, about 15 students resolved to formally establish RhodesMustFall in Oxford (RMFO), in late April.

For a month, RMFO met to plan its first public protest. Meetings were held inside the Rhodes Building of Oriel College—a consciously ironic venue. RMFO’s first protest happened at the Oxford Union during a debate on colonial reparations. Arriving at the Union Bar on 29 May 2015, RMFO organisers noticed a pre-debate cocktail flyer called ‘The Colonial Comeback’. The accompanying image was of black hands in shackles. Convinced this was a joke, RMF organisers asked Oxford Union authorities whether this was, in fact, an official advert endorsed by the Union. It was. 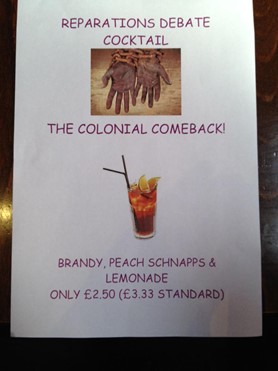 The flyer was immediately shared on Twitter under the hashtag #RhodesMustFall and was re-tweeted enthusiastically. Soon, several national newspapers were interested in covering RMFO. The protest that evening, which consisted of hoisting posters while the proposition (arguing that Britain did not owe colonial reparations) spoke, garnered further attention.

The following weeks saw a flurry of media activity as RMFO pressurised the Union to offer an apology. The apology arrived on the 1 June, along with a public statement from the Union (unprecedented in its history) in which it admitted to being ‘institutionally racist’. Just three days after it had officially launched, RMFO had sparked a charged debate over Oxford’s implication in colonial glorification.

In October of 2015, RMF held a further public action at the Oxford Matriculation. In a campaign called matriculACTION, matriculating students wore red ribbons to signify Oxford’s role in colonial violence. Three weeks later, RMFO held its first protest outside Oriel College, officially handing over a petition to College officials calling for the removal of the Rhodes statue. By January 2016, RMF had swept across the University with various JCRs and MCRs voting for the statue’s removal. Momentum reached it height when the Oxford Union voted by 245 votes to 212 that “Rhodes Must Fall” and the Oxford University Students’ Union passed a similar resolution.

Simultaneously, large student protests over racism in the United States attracted global attention. Protests at institutions like Yale, Georgetown, Amherst and Harvard drew directly from the ongoing South African struggle. The Royall Must Fall movement at Harvard Law School drew its name from a notoriously brutal Massachusetts slave-owning family whose seal formed part of the school’s crest. The movement scored a significant victory when, on 15 March 2016— after months of campaigning—it convinced the Harvard Law School to retire the crest.

Initially, the Oxford protest seemed to have borne fruit. Oriel College released a statement on 17 December saying it would review the statue and remove a plaque celebrating Rhodes. It committed to a "listening exercise" over the presence of the statue that would last six months. However, as a new Vice-Chancellor took office and media narratives turned to victimising individual RMF campaigners, Oriel backtracked, allegedly under donor pressure. The "listening exercise" was cancelled, and the College refused to remove either the plaque or the statue on 28 January 2016.

In response, RMFO widened its campaign, while retaining its demand for the Rhodes statue to fall. In the "March to Decolonise Oxford", held on the 9th March 2016, further demands targeted colonial iconography at Rhodes House, All Souls College and Oriel were sent in a series of letters to various officials. All these institutions refused to entertain the demands or to engage with RMFO.

In emails to RMFO, Vice-Chancellor Louise Richardson, called demands for a panel of academics of colour to review the Oxford curriculum ‘invidious’, while the warden of All Souls, John Vickers, described the name of the Codrington Library, at that time, as a ‘fact of history like slavery’. The Chancellor of Oxford, Lord Patten, compared RMFO to the Islamic State, and suggested that students who criticised colonial iconography should ‘study elsewhere’.

Oxford’s refusal to engage RMFO’s demands eventually slowed RMF’s momentum. As international students returned to their home countries and hope of any reform receded, RMF lost momentum as 2016 unfolded. The movement’s last public action before reigniting in 2020, came on the  2nd December 2016, outside Oriel College. A group of RMF organising members chronicled the history of RMF’s first wave in a book published in 2018, titled Rhodes Must Fall: The Struggle to Decolonise the Racist Heart of Empire.

Young-Powell, A., & Page, L. (2013) The absence of black students diminishes the greatness of Oxbridge. The Guardian, 4 December. http://www.theguardian.com/education/abby-and-libby-blog/2013/dec/04/bla...

Image carousel: click on an image to view it full size

Back to Student Movements and Campaigns